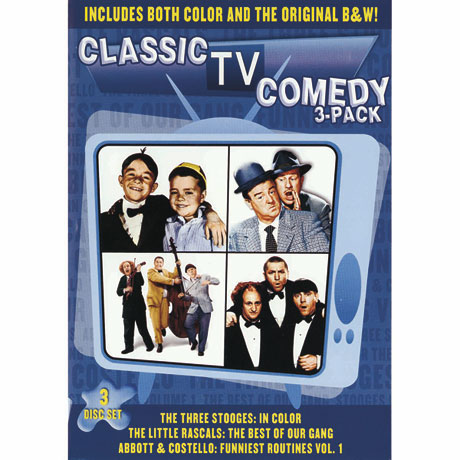 Revisit an era of comedy legends with this cherry-picked set of career highlights, remastered and viewable here in color or in the original black and white. There's plenty of mayhem whenever the Three Stooges are involved, and they raise a ruckus in Disorder in the Court, Brideless Groom, Malice in the Palace, and Sing a Song of Six Pants, while Abbott and Costello show off their peerless wisecracking in "Hole in the Wall," "Jonah and the Whale," and the immortal "Who's on First?" Also included is a disc of the Little Rascals, seen in the classic episodes "Hide and Shriek," "A Lad an' a Lamp," "Fly My Kite," and "The Kid from Borneo."
• Moe Howard, Larry Fine, Bud Abbott, Lou Costello, Carl Switzer, George McFarland & others. Preston Black, Robert F. McGowan & others, directors.
• Legend Films (3 DVDs Full screen/Not Rated) (7 hrs 15 mins/2007)